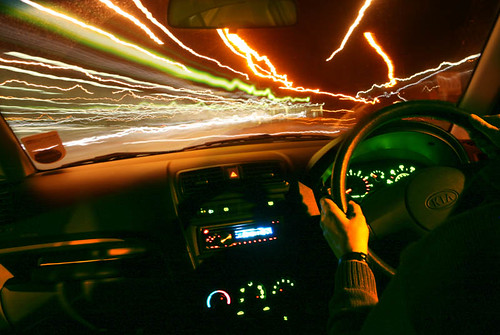 The road through Fairford was shut as some roadworks were overrunning. It was shut from a rather awkward junction which meant going miles around.

Having been briefed by my colleagues before leaving, I set off on the 8 mile journey from Fairford to Cirencester at 5. I got home at about 6:20.

Somewhere along the lines, I either missed a turning and/or took a wrong turn, and before I knew it I was greeted by a big “Welcome to Oxfordshire” sign.

I can only imagine I’d taken some sort of back route which had taken me to the other side of Lechlade. Either way, on narrow country lanes there was no room to turn round, and nowhere to pull over and put my sat nav on (my sat nav is very good, it talks to me in Greek, it’s quite fun following sat nav really).

I just carried on going… until I eventually found a bigger road, where saw a bus which said it was going to Swindon. I followed it, on the basis that would be able to find my way from Swindon to Cirencester quite easily.

Then I got stuck in traffic – there was an accident on this bigger road with several miles of tailbacks in both directions.

Once clear of this traffic, I continued towards Swindon and turned up not far from the Greenbridge Retail Park. After finding the A419 I promptly joined the back of ANOTHER queue – this time caused by a broken car blocking one lane.

The traffic was a nightmare… but other than that, it was quite an adventure. Not a clue where I was though. “Oxfordshire” is the best I can do.