Working full time and running a radio station at the same time means I have very little time to relax. So I’ve now decided that once a month I will head to the continent, just for one night.

Last weekend, just 2 weeks after returning from Itzehoe, I headed back to Germany. I booked a cheap flight from Birmingham to the city of Hannover (I believe the English spelling is Hanover but I will use the German spelling throughout this article).

Hannover is the capital of the Federal State of Lower Saxony (Niedersachsen).

Squeezing all my things – a change of clothes, toothbrush, laptop, toothpaste, and my DAB+ radio – in to one bag, I needed no luggage. As well as saving time at the airport, this made things much cheaper!

On arrival in Germany I made my way on the Hannover S-Bahn to the Hauptbahnhof – the Central Station. I chose to stay at the Hotel Königshof am Funkturm, due to its location just a couple of minutes walk away from the Hbf. I left my luggage in their luggage room and set out in to the city.

The Tourist Information Centre in Hannover is located opposite the Hauptbahnhof. There, you can buy a little booklet named ‘The Red Thread‘. Available in German, English, French, Italian, Spanish, Polish, Turkish, Russian,  Japanese and Chinese, the booklet talks you through a route which you can walk at your own pace around the city.

You don’t need to worry about reading maps: the route is painted in red on the pavement for you! In addition to the main route you can also opt to take a 45 minute detour to see the Maschsee Lake.

The route took me past many interesting buildings, including the Opera House, the original HQ of the Hannoversche Bank, the Aegidientor and the new Rathaus (town hall).

I spent quite a bit of time exploring inside the Rathaus, and got the chance to go to the viewing platform at the top of the tower to enjoy the views over the city. Fantastic views!

I had a walk around the lakes too; both the Maschteich in the well-kept gardens of the Rathaus, and the larger Maschsee lake. As I walked around the Maschteich lake near the Rathaus I met a visitor from the Philippines who was in Germany on a business trip. Where I was walking around the city with a map and a guide book, he was following the sat nav on his mobile using just a set of post cards to identify the sights he wanted to see!

I had lunch – Currywurst with chips – by the Maschsee lake, while sitting outside in the Sun! It was easy to forget that I was in the centre of a city and not at the beach.

Continuing my route around Hannover I saw the masterpiece from the mule stables, now located above the entrance of the city’s Public Works Department; Waterloo column (the Kingdom of Hannover, at the time in personal union with Britain, fought against the French – not surprising given that Queen Victoria and her predecessors were from the House of Hannover).

I saw the statues of the gods above the waterfall, as well as the ‘stalwart professors’: the memorial to the Göttingen Seven who protested against the anulment of the Kingdom of Hannover in 1837. Plus, I saw a little bit of Venice within Germany: I stood on the Leine Bridge and enjoyed the view back over to the Rathaus.

It had taken me almost 6 hours to walk this route so far, and I was not even half way through – however, time was getting on and, my feet tired of all this walking, I needed a rest. I returned to the hotel to retrieve my things and checked in to my room.

Here’s a slideshow of photos from my afternoon in Hannover: 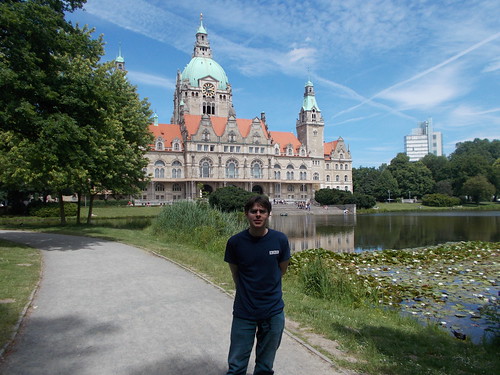 An Evening in Göttingen

Later that evening I travelled to the town of Göttingen: which lies about 120km from Hannover. A university town, it is the twin town of Cheltenham.

By car it would take about 90 minutes to travel there on the Autobahn, but I took the 19:35 ICE (InterCity Express) train, reaching Göttingen just over half an hour later. From the station I followed signs to the old town; the narrow streets and old-style buildings appealed to me!

Göttingen has a lovely old town, and in its centre a pedestrianised shopping area which largely resembles the Promenade in Cheltenham. After walking around a bit it was time to find somewhere to eat. My preference was somewhere German, but should I fail to find somewhere I had noted the Greek ‘gyro’ place which I spotted on the way from the station.

In the end, I settled for the Bullerjahn restaurant, located in the old Rathaus. I sat in the outside seating area overlooking the pedestrianised square. My meal wasn’t the best meal I’ve ever had, but the location was great and I enjoyed sitting down doing that “people watching” thing that you inevitably end up doing while waiting for your meal.

After dinner I decided to walk it off by going for a little stroll in a tiny piece of Gloucestershire within Göttingen. I went to Cheltenham Park! It was a good time of day to walk through the park, with many Germans having BBQs in the park at dusk. The smell of wurst and everything else was good! 😀 My own photos of the park didn’t come out so well in the fading light, but a quick Google search reveals some decent ones.

Aware that time was now getting on I made my way back to the railway station; I caught the 23:05 service back to Hannover. Trying my hardest not to fall asleep on the train (its final destination was Hamburg-Altona: Didn’t want to overshoot my stop), I successfully made it back to my hotel room not long before midnight.

Here are my photos from my trip to Göttingen: 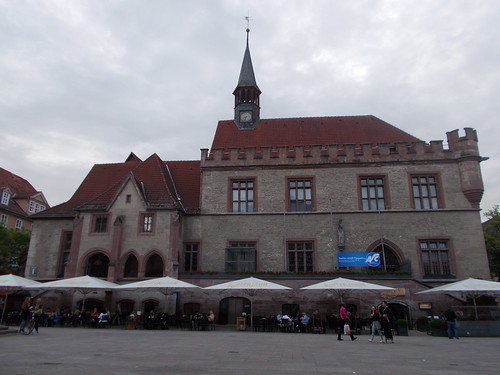 At 10:35 I boarded the S-Bahn train back to the airport. 15 minutes later I stepped off the train on to the platform and headed for security. 8 minutes after leaving the train, I arrived at the departure gate with 10 minutes to spare before boarding was due to commence.

I’ve yet to decide where my July day-trip will be; it might be Germany (Frankfurt or Stuttgart, maybe); perhaps I might try Spain or Italy; or perhaps I’ll find somewhere else!?!